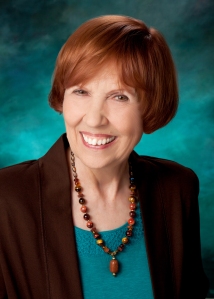 Patricia Smith Wood’s father, first as a police officer, and later as a career FBI agent, sparked her own interest in law, solving crime, and mystery. After retiring from a varied and successful business career (including eighteen months working at the FBI, being a security officer at a savings & loan, and owning her own computer business) she attended writing seminars, conferences, and in 2009 graduated from the FBI Citizens’ Academy. Aakenbaaken & Kent published her first mystery, The Easter Egg Murder, on February 14, 2013. Murder on Sagebrush Lane, the second in the series, is finished and awaiting publication.

Last week I reviewed her book and this week she’s here to talk with me about it.

AF: The Easter Egg Murder has one of the most complicated plots I’ve ever read. How did you keep track of it as you wrote? (I picture you with a wall-sized chart covered with color-coded diagrams, or moving some sort of double-layered chess-board of characters around.)

PSW: It really wasn’t a problem for me. I’m a “pantster” and I didn’t map it out. The story simply developed as I wrote. Sometimes I’d start a chapter with a vague idea of it going one way, but it ended up completely different. I would finish and think, “Well, now what?” Then the next idea would just be there, and I’d go with it. I routinely found myself surprised at the twists that came out.

AF: Was there a historical event similar to the murder of Chipper Finn that inspired this book? Are any of the characters from that 1950 part of the plot based, even loosely, on actual people in New Mexico history?

PSW: Definitely! The actual murder of Cricket Coogler happened in Las Cruces, NM in 1949. But her body wasn’t discovered in the desert until sixteen days after she disappeared. Four young men (17-18) found her partially buried body in the desert on the Saturday before Easter when they went rabbit hunting. I used the basics, but changed the details to suit my version. Many of the actual people make an appearance (usually in disguise) in my version. And of course, Cricket’s murder was never solved.

AF: 21st century Albuquerque is the main setting in your book, and easily recognizable. Tell me about Los Huevos. I looked it up and found a rock-climbing site of some apparent difficulty, but no town. Is it based on a real place? Do you have any connection with a little town like that?

PSW: Los Huevos is a completely made up town, located conveniently at the foot of Los Huevos Peak (also fictional). Since the body in my story is discovered on Easter Sunday morning at the foot of Los Huevos Peak, that would be a natural reason to call it The Easter Egg Murder. I had been told I should have a title that stood out, and that seemed to me to fit the bill. I have no connection with such a town, but I suppose the small town of Los Lunas (which is actually southwest of Albuquerque about 20 miles) might have given me the idea.

AF: The story of the murder in 1950 and all the events around it, all the characters involved, could have been a book by itself. Did you ever consider writing it that way? How did you decide to make it a story within the story?

PSW: The story of the actual murder (in 1949) has already been written. In fact, I read everything I could get my hands on about Cricket Coogler’s murder. An excellent book by Paula Moore, titled Cricket in The Web, came out in 2008, right about the time I finished my first draft. I wanted to use some actual things, but ended up fictionalizing most of it. No one in New Mexico who knows about this murder wants to say, on the record, who they think was responsible. It was much more fun (and safer) to make it up.

AF: Harrie has precognitive dreams which add a sense of foreboding to the early part of the story. Was there any additional reason behind your decision to integrate this into the plot? I have this kind of dream myself so I liked that you treat it as only a little unusual. Also, it seemed true to “the woo” of New Mexico to have it in there but not make big deal of it.

PSW: I know several people who have some form of precognition, or “knowing”, about events. It’s always fascinated me and seemed like an interesting story-telling tool to use in fiction. I hoped to convey the mystical atmosphere that weaves it way through New Mexico’s history and culture, from the Anasazi and Chaco Canyon ruins to present day native practices.

AF: Tell me about your research. The illegal gambling and the political corruption in New Mexico back in the fifties were things I really hadn’t heard that much about, and I found them fascinating.

PSW: My father was an FBI agent who was transferred to the Albuquerque Office in 1951, two years after the murder. Events were still transpiring when he arrived here, and he later told me what he knew about the case. I also interviewed many people who lived through that era in New Mexico politics during the period 1949-1950. That included former FBI agents, former residents of Las Cruces, a couple of newspaper men who were around at the time, and even the former governor of New Mexico, who was elected mostly because of the Cricket Coogler murder. I also read books, and watched a film made on the subject: The Silence of Cricket Coogler. The book Cricket in The Web goes into the gambling issue in great detail, but I had also heard a lot about that from the people I interviewed.

AF: I know you have a good background in law enforcement, but you chose to give major roles in solving the mysteries to the two amateur sleuths, though you do include police and FBI. I’d love to know how you made that choice, and how you came around to casting two editors in the role of sleuths.

PSW: I have been a fan of the “cozy” mystery genre since I was a teenager. The cozy requires the sleuth (or sleuths) to be amateur, so it was always my intention to follow that basic rule. My favorite series at that age was the Judy Bolton mystery series by Margaret Sutton. In the early books, she was a teenager like me, and her boyfriend, Peter, helped her solve the mysteries. When they grew up, Peter became an FBI agent. Since my dad was an FBI agent, I thought that was a cool thing to do. Toward the end of the series, Judy and Peter eventually married, and she still managed to help him solve crimes.

As for making my sleuths editors, it seemed the best way to get them involved in a half-century old murder. By editing Senator Lawrence’s book about the murder, it gave them an excuse to become embroiled in digging out the answers. I didn’t stop to think how that might play out over a series, but in the beginning, I didn’t know it would be a series!

AF: Just for fun, I have to include this “outtake.” I made the mistake of asking Pat a question about some other books, and here’s the answer.

PSW: If you “Googled” my name, you might have run across a different Patricia Wood (which is why I insert my maiden name into the mix: Patricia Smith Wood) who has written at least one book (The Lottery) and perhaps more by now. She lives on a boat in Hawaii (which I obviously don’t). But that didn’t stop a local magazine from running a small piece about The Easter Egg Murder in which they stated that the author, Patricia Wood, lives on a boat in Hawaii!

It turns out Patricia Wood is a pretty common name. One day in 2012 I received a phone call from a local television station asking if I was Patricia Wood. I agreed that was me, and they then asked if I was the Patricia Wood who had stolen jewels from luggage at American Airlines and was I headed for federal prison in two weeks. Once I recovered my senses I assured them I was not that particular Patricia Wood, they thanked me and hung up.

AF: Tell me about your newest project.

PSW: My newly finished second book in the series is Murder on Sagebrush Lane. In the first chapter, Harrie McKinsey goes out to retrieve her newspaper at 5 a.m. on a summer morning and finds a small girl playing in her flower beds. She notices a dark stain on the child’s pajamas and teddy bear, and when she realizes it’s blood, her journey to find the child’s parents gets her involved in another murder. Of course, Harrie’s life is never that simple, and before it’s over there’s another murder, a race to uncover a plot to steal top secret data, an attempted kidnapping, and a desperate killer who intends to make Harrie his final victim.

AF: It sounds exciting. I’m glad to know there will be more of Harrie in the future. Let me know when the book comes out. Thanks so much for being my guest.