The relief feels wonderful and yet disorienting. It’s hard to adapt. I have my life back. Book seven in the Mae Martin Psychic Mystery Series, Shadow Family, is with my editor now. 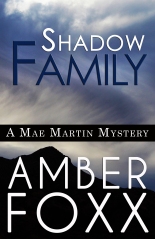 I sent it off last night—actually, at around 3:30 in the morning. I know my editor will be sending me sections to revise, but today, I can think about the next book. I can even write a blog post.

Relief came with rain as well. September is still summer, the grand finale of the monsoon season, with temperatures in the eighties, cooler than August by a long shot. It’s rained three times—one drizzle, one thunderstorm with hail and two inches of rain in two hours, and one nice steady all-night rain. Wow! The jewel-colored greater earless lizards need to sunbathe and get warm.

When it’s cloudy, they hug the rocks with their wee limbs, seeking every last bit of sunbaked heat from the surface. The baby lizards are out, flawless miniatures of the adults, no bigger than a bug with a tail. I marvel at their toes, and at their orange stripes and green legs, their little eyes blinking up at me. Desert plants are in bloom, yellow chamisa and something purple—maybe some kind of sage. And with all the rain, Turtleback Mountain is more green than red.

The other night I went for a walk with a friend and his dog, hoping to see bats over the wetland by the river, but it was too windy for them. As we were leaving Rotary Park, which is right on the Rio Grande, a coyote started yipping and singing on the bank directly below where we’d been standing a minute earlier while my friend took a dead bird away from his dog. The dog, strangely, wasn’t interested in the coyote, only the dead bird. A whole coyote chorus started across the river as the one on our side would sing and the others would answer. The dog still didn’t care.

White rabbit update. First, her former owner said he only had females, so I’m now calling her “she.” Second, she’s been chased by dogs and by a cat, and someone sprayed weed killer on all the plants she used to nibble on in the yard of the empty trailer across the alley. Fortunately, she finds shelter in our yard. I decided to feed her nightly after all, because I’m going to try a new way to catch her. Her future owners brought a live trap, and we baited it with sliced pears and fresh greens. It may be shocking for her to go to her usual buffet and have a door close behind her, but she’ll escape predators and poisons to be loved and petted. And then it’ll be her turn be relieved. If all goes well, her new owner will show her in the county fair. Because she is so beautiful.

4 thoughts on “Relief and other updates”

Helping you get the life you've always wanted

My journey - The good, bad and the ugly