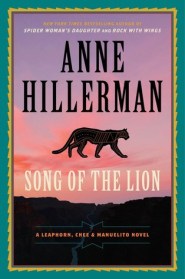 A bomb goes off outside a high school basketball game in Shiprock, and the “wrong” man dies…

Set partly in New Mexico, partly in Arizona, and entirely within the Navajo Nation, this is Anne Hillerman’s best yet. Her strengths are character, setting, and relationships, as well as a solid plot. A good mystery is not only a case to be solved, but a story about people the reader cares about. Hillerman integrates police work with family and friendships, Navajo culture, and a sense of the sacred.

Bernadette Manuelito is a strong and engaging central character, with Jim Chee and Joe Leaphorn in supporting roles. It was wonderful to read a few chapters in Leaphorn’s point of view, and I admired how the author tuned into his thinking and personality, with explorations of his inner life as well as his process as he solves a puzzle. The new characters are unique and original personalities, including, as Anne Hillerman always does so well, genuine, natural humor. The bombing victim’s story is sad and true to life, making this one of the most emotionally moving mysteries I’ve read, and the man who was the real target of the attempt is developed with depth and complexity.

The various Native cultures linked to the Grand Canyon region have meaningful moments in the telling of the story, and the canyon itself comes to life as a setting. The red herrings are believable and the final solution to the mystery makes sense without a single forced bend in the trail to get there.

This is the twenty-first book in the series. A reader could begin here and not be lost, but I recommend reading all of them, the three by Anne Hillerman and the ones by her father Tony Hillerman that preceded them. When I moved, I gave away most of my paperback mysteries, but I kept these.

Click here for my interview with Anne Hillerman, done when Rock with Wings came out. It’s interesting to look back on her early plans for this book two years ago, and her thoughts on writing Joe Leaphorn’s point of view.

3 thoughts on “A New Mexico Mystery Review: Song of Lion by Anne HiIlerman”