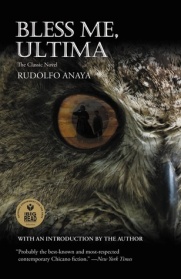 The narrator, Antonio, is an intelligent, spiritually-inclined boy, the youngest of a large family in rural New Mexico. The villages and the land around them are drawn with depth and beauty. That’s the strongest aspect of this book: the spirit of the place. Trees, river, lake, sky, and soil are alive.

The tensions between farming and the restless life, between Christianity and earth-based spirituality, between compassion and cruelty, dark magic and healing magic, make up the drama of the book. Though the protagonist is a child, this is in no way a children’s book. Tony witnesses adults at their violent worst several times, as well as at their courageous best. The scenes of healing and of curses are extraordinary. Anaya’s portrait of the culture he grew up in is masterful.

Tony’s spiritual maturation is true to the ways of childhood, as he searches for answers to questions about the nature of God, of justice, and of mysterious things. The friendships of childhood, and the cruelties and sheer awfulness of some children, are real and vivid. A number of the characters are one-dimensional—Tony’s mother, his sisters, and most of the girls at school—but this is how they’re seen through the eyes of a young boy. Ultima, the curandera, is idealized, the essence of her kind of spirituality, and the tavern-owner Tenorio is the opposite, the dark force. In between is Tony’s friend Cico, who introduces him to a mystical divinity in nature. Cico is just another boy, but he’s one who knows a sacred secret.

The dream sequences are long though beautifully written. The children’s Christmas play runs on a bit, too, with no real contribution to the story—I think the author must have found it funnier than I did. All in all, though, the story is intense and compelling except for those sections, and made me feel even more deeply connected with this place I live, this place I love, New Mexico.