I finally met the man who rides an adult tricycle in colorful suits. The day I met him in Ingo’s Art Café, his suit was daffodil yellow. I said I’d admired his many bright outfits over the years and asked what inspired him to dress that way. He said he had a background in broadcasting—mostly radio. He was a performer by nature. One of the things I love about Truth or Consequences is how clothes can be self-expression to any degree you please, without concern for fashion or conformity.

The same is true of homes. Then someone built a bland, multi-story house that looks like it escaped from an East Coast suburban subdivision and landed on the corner of Clancy and Wyona. I try to like it, but I can’t. Next door to it is a tiny bright purple-and-green place. Across the street from it is a small blue-and-white house with an array of yard art made from blue glass bottles.

T or C yard art is usually made from recycled objects, curated for color, materials and theme. Some people like windmill effects and rusty metal, others prefer glass, machinery, hats, vinyl records, broken guitars, old trophies, or even fuses. And then, there’s the tree with flexible coil ducting and a metal horse head.

My picture didn’t capture the extensive ducting wrapped around the rest of the tree on the other side of the fence. I like this much better than the bland new house. I will try to think of the new house as nonconformist in its own way—refusing to be the least bit eccentric. But I hope the people who move into it will gradually get the urge to decorate. 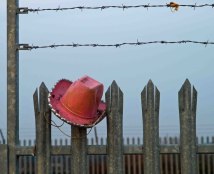 Music. The quality and variety here is incredible, all within walking distance of my apartment. I’ve danced to blues and rockabilly at the T or C Brewery; listened to the Southwest Chamber Winds at Grapes Gallery, admiring the art during the concert; attended open mic night at Seba Gallery for original acoustic music by local singer-songwriters—again mingling music and art; was immersed in healing music in a church; and was surrounded by the vibrations of healing music again in an amazing sound-space designed especially for such events. This last concert, Matt Venuti’s, was like nothing I’d ever heard before. He plays a tuned drum, an instrument that is both melodic and percussive. I may have to incorporate that instrument into my books. Jamie would love it.

Full circle sunsets. Even with no clouds, there can be as much or more pink in the east over the Turtle as in the west. In the summer when there are storm clouds, the bowl of color effect is breathtaking and constantly changing. Orange, blue gray, rose pink, salmon pink, yellow-gold—all encircling the town.

Freedom to be yourself. Two of my neighbors happened to paint their houses blue and purple at the same time without consulting each other. (One house was previously pink paisley, the other solid lavender.) One of the purple-and-blue houses has a statue of an alien in saint’s robes on the porch. Self-expression in outdoor art is everywhere, and in the way people dress. I was at a meeting with my fellow yoga teachers, sitting outdoors at one of the downtown establishments, and I kept seeing various colorful folks pass by, such as a stout Santa-Claus-like man in red suspenders riding his bicycle with his dog on a long red leash trotting down the middle of Broadway. One of the other teachers, who was facing in toward the windows rather than out toward the street, would see that look cross my face and ask, “T or C?” And that would sum it up. Yep. T or C.

My outdoor “gym.” I take exercise tubing down to the Rotary Park on the Rio Grande and attach it to a pole of a picnic shelter for resistance training, and use the benches for various bodyweight exercises, while enjoying a view of the river, Turtleback Mountain, and wildlife ranging from ducks and herons to huge orange dragonflies. In keeping with T or C’s freedom to be oneself, no one has ever looked at my funny for doing this.

Too much to do. Especially at this time of year. The weather is perfect for running and hiking, and of course the end of October and early November are festive, too. First there was the costumed dance party at Grapes Gallery, a fundraiser for Friends of the Pool, with live blues music and the creative people of T or C dressing up and competing for the best costume award. (Artists do great Halloween outfits. My Gumby costume was pretty plain compared to the winners.) Then there was Day of the Dead in Mesilla, with all the beautiful shrines to loved ones on display in the old plaza under a classic New Mexico blue sky while musicians played from the bandstand. ( I know, this was not in T or C, but only an hour away.) On Halloween, the children’s costumed safe walk took place on Broadway, and I had to go around and admire everyone. The street was closed, business owners and employees were in costume on the sidewalks handing out treats, and families in Halloween finery were trick or treating. People here love to dress up. A man dressed as a baby doll stood in the doorway of his shop sucking on a lollipop. I even met a tiny dog in a Harley jacket and little black doggy jeans. Later, I went to a showing of Nosferatu, the black-and-white silent vampire movie, at Rio Bravo Fine Art. Three classically-trained musicians improvised an amazing, intense and spooky score live. (Surrounded by great art, once again.) Some of the audience members were masked or painted. One was, of course, entirely black and white. I stopped by another dance and costume event on my way home, but I didn’t stay. A writer has to go home and write. But last night, there was more good music to go out and dance to. I call it research. My protagonist likes to dance, too, after all.