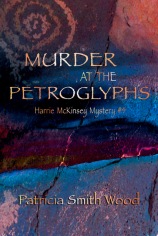 Once again, Patricia Smith Wood has crafted an intricate puzzle of a mystery. In short, tight chapters, she reveals the discovery of a death, and the process of solving how a body came to be where it was—but this is no simple question of who done it. The twists and surprises keep coming. Wood’s books always give my brain a good workout trying to follow the clues. The relationships among her cast of professional and amateur sleuths makes the involvement of amateurs more plausible than in the average amateur sleuth mystery. Another reason to get involved is this: Harrie McKinsey has prophetic dreams, and in one of them she sees the dead body at Petroglyphs National Monument.

There are so many facets to the mystery, so many contributing investigators—FBI, CIA, and Albuquerque Police Department, as well as Harrie and her friends and colleagues at her editing service—Wood did well not to have major subplots. It’s unusual in what is technically a cozy mystery, but it was the right choice. Most cozies have romantic subplots, but the central characters here are in established relationships. Most cozies are comic. Though many of the characters in this book display a natural and engaging sense of humor, it isn’t a comic mystery. It’s cozy in the sense of limiting onstage violence and having amateur participation, with much mystery-solving taking place over dinner or coffee.

I enjoyed the various Albuquerque settings, from restaurants to major parks like the Petroglyphs to local secrets like the Hidden Park, and even an airfield used by drone enthusiasts.

Many scenes take place at Southwest Editing Services, Harrie’s business. I was surprised at the importance of paper copies as well as electronic copies of manuscripts in a professional editing service. I’d thought paper was a thing of the past, but apparently not. I learned something.

I would have liked a stronger thread connecting the opening and the ending. The title, the cover, the first chapter, and park ranger Nick Ellis’s deep connection to the spirits of the ancient ones made me expect more continuity on this theme. In fact, I initially expected a different kind of story altogether. Harrie doesn’t come across as having a mystical connection to the land and its history, so the sudden transfer of what has been Nick’s spiritual experience to her felt as if an editor said to bring that theme back. Harrie is already psychic about her life and family, and having her new dream come from the spirits struck me as out of character. A couple of backstory chapters and a few chunks of expository dialogue also felt like afterthoughts or requests for additions, rather than integral parts of the otherwise tightly woven plot.

The wrap-up of the mystery plot was one-hundred-percent unexpected, even though I figured out the borders of the puzzle. The explanation scene is realistic and well-structured. (I’m always grateful when a book doesn’t have one of these clichéd confessions from a killer holding protagonist at gunpoint.) Wood has real skill with crowd scenes. She can juggle six or eight people in a scene and never let the reader forget any of them.

Complexity is what she does best. If you like a mystery that puts your mind to work, you’ll enjoy this one.

A New Mexico man long missing and presumed dead seems to have come back to broadcast on ham radio, only to fade out as if something terrible has happened to him.

Patricia Smith Wood has crafted another tight puzzle of a mystery in this third in the Harrie McKinsey series, once again blending multiple mystery genres—a touch of cozy, a touch of police procedural, and now a touch of the PI story as well. Amateur sleuths Harrie and Ginger, the Albuquerque police department, and the FBI come together on a complex case with help from a new character, private investigator Bernie Thomas, a former member of the APD. His role as a liaison between the professionals and the amateurs is an effective device. The amateurs take some risks, and they use their brains and their ability to gain trust and talk with people, but they don’t do what’s better done by the pros.

Harrie and Ginger, who are studying to become amateur radio operators, are naturally and believably drawn into investigating the apparent broadcast from the missing Alan Whitney. I like a mystery that gives me glimpse into a hobby or occupation I previously knew little about, and this book provides a fascinating exploration of amateur radio without ever losing the pace. Wood slips the exposition into the energetic dialog as part of a page-turning plot.

Much of the detective works, realistically, takes place through interviews, asking the right people the right questions, and through research and the use of creative intelligence to understand the clues. Most of the violence takes place offstage, though there are suspenseful scenes in which danger threatens characters the reader comes to care about. While this isn’t in the category of a humorous mystery, there is humor in the characters’ banter, and one of the criminals was an incredibly amusing diversion. He’s a bit like someone who walked out of a 1940s black-and-white movie in a way, and yet also wholly original.

Wood is the master of the chapter-ending hook that makes you want to keep going. Surprises kept coming around the corner right to the very end. If you like to challenge your brain to solve a mystery, Patricia Smith Wood is an author you’ll come back to again and again.

To read more about this author, see my interview with her and my reviews of her first two books, The Easter Egg Murder and Murder on Sagebrush Lane