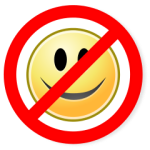 Movies featuring things blowing up are popular. People like to watch demolitions, from buildings to demolition derbies. And then there is art-to-be burned, such as Burning Man and Zozobra. When I lived in Virginia, I used to clean the park where I ran and sometimes enlisted the help of several boys who played there. One day, they found a large toy firetruck in the stream and pulled it out—and proceeded to smash it to pieces with rocks. This was obviously more fun than playing with it.

Someone has been making faces on the trail where I run in the desert. Not walking along being silly, but arranging pebbles in smiley-faces on top of the rocks that mark the edge of the trail. The first one didn’t annoy me, but then they multiplied. I don’t mind intriguing, meaningful art made among the desert rocks. A labyrinth. A miniature Stonehenge-like creation. A rounded lava rock that looks like a fertility goddess surrounded by a little maze and an altar. A small rock nestled in a hollow in a large rock just because it fits so perfectly. Such arrangements fall over gradually or get covered with sand, and nature looks natural again. Someone left a small painted rock near the trail, red white and blue with the Texas flag’s star, the name of a soldier who died in combat, and few words of love and honor. It means something. No one moves it. Perhaps he used to love this trail and used to hike it with the person who left the rock. But smiley-faces? Twenty or more of them? That’s nineteen clichés too many.

On a lovely, sunny, seventy-degree winter day, I got tired of them and gave a swipe at one as I passed. No effect. The pebbles had been glued to the trail-marker rock. What the heck? Did the face-maker think this stuff should be permanent? I soon found that a quick kick could dislodge most features of the glued-on smiley-faces, and it felt good. Can I justify it? Maybe not, but to me, gluing all those faces along the trail was arrogant. If they’d been arranged lightly, without attachment, I might have knocked one aside and been content, had my fun like the boys smashing the toy firetruck, and forgotten about it. Nature would have blown them away eventually.

Writers are regularly advised to “kill your darlings,” those scenes we love that weigh down the pace, or those wonderful (to us) witty lines that don’t serve the story. We have to weed out clichés and our favorite over-used words. They can have an effect on readers like seeing twenty-plus smiley faces, an intrusion on the flow of enjoyment. Today I noticed that someone else had destroyed smiley-faces. There were face-pattern glue marks on some rocks with branches laid over them, as if my fellow self-appointed curator of trail art was saying, “Don’t even think about putting that back.”

Sometimes I store my cut scenes and lines for a while, in case I want to put them back, but ninety-percent of those darlings never return. Nothing in the first draft is glued in place. I have to destroy in order to create. Fortunately, I enjoy revision. It’s a lesson in non-attachment, and almost as much fun as smashing a smiley.

In Martyn V. Halm’s one-of-a-kind suspense novel, In Pocket, the narrator Wolfgang, a pickpocket, begins to doubts the motives of a young woman who befriends him because her shrines don’t seem authentic. He says that in his observations of women’s homes, they make shrines. He doesn’t mean religious ones but highly personal arrangements of objects that honor special aspects of each woman’s life.  When I think of friends’ houses and apartments, the most common shrine is the family pictures shrine, but I’ve seen idiosyncratic ones. I recall a friend who had peacock feathers and other objects arranged around a mirrored dressing stand on the hall landing, her shrine to I know not what, but it had a kind of art deco bordello feeling to it.

Some people’s kitchens are shrines, arranged to honor the gods of nourishment and conviviality. My academic colleagues’ offices are shrines to scholarship, with diplomas and books and journals—but also softened with mini-shrines to family. In my books, I’ve used this kind of imagery—Charlie’s door and office in The Calling are the most vivid example—as a way of revealing character and also implying a mystery. Why do people  build the shrines they do?

I have so much meaningful art around me that my whole home is a shrine. And then I look at the clutter, the heap of writing reference books, the heap of journals on alternative medicine, the stack of books and magazines I’m reading, the notes on my work in progress spread on the left side of my desk, and I think—that’s not clutter, those are shrines. Shrines to reading and writing.

When I move to a smaller space, I’ll be parting with slice-of-life shrines, eccentric random gifts with stories behind them. A Roswell NM alien-face paper fan a friend gave me at the Mescalero ceremonies many years ago. A Gumby one of my yoga students gave me. A stuffed toy tree frog. I’ll trust my heart to store the people and memories I echo back to myself with things like these little green creatures. Sooner or later, we all part with everything we own. Practicing non-attachment seems abstract at times, but not when I am taking down my shrines.