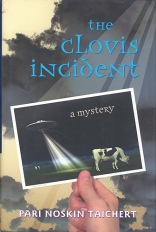 Until I read this book, all I knew about Clovis was that it was home to the Norm Petty recording studio, where Buddy Holly recorded his hits. It’s not one of New Mexico’s more famous places and seems unlikely ever to be one. This makes the premise of the book immediately appealing. Freelance PR pro Sasha Solomon is trying to get a gig promoting flat, unimposing Clovis as tourist destination.

She was doing PR for a health care company that included alternative therapies in it coverage, and in true Albuquerque/Santa Fe area style, she tried out so many shamans and other mind-body-spirit healers she had a kind of psychic meltdown, making her mental boundaries so porous she now hallucinates under stress. She’s been fired, and she needs the Clovis job.

The story gets more and more eccentrically New Mexican as Sasha looks into alien abductions as part of her PR plans to promote alien-seeking tourism in Clovis, (Her visit to alien-centric Roswell is a small but delightful part of the book.) Alien abductions also figure in a murder investigation, as do Sasha’s strange visions, when the body of a Singaporean military officer is found on a friend’s land.

The less colorful aspects of life in Clovis, from the military base to the farms and ranches, are portrayed with respect and realism in the framework of a humorous mystery. In a crucial scene set in the midst of a large-scale dairy farm, suspense and comedy run neck in neck.

Author Pari Noskin captures characters brilliantly, whether they are major players or walk-ons. Sasha is an original creation, likeable but far from sweet. Detective LaSalle grew on me. The longer Sasha had to deal with him, the more he was revealed in the slow, natural way strangers get to know each other.

Underlying themes include mother-daughter relationships, friendships, rural life, and romance in middle age, tied together through the mystery and laced with an inside look at the PR business. The mystery is multi-layered with so much entertainment that I sometimes forgot to try to solve it. I know a book is working when I respond to it as a story rather than a plot. It turns out that I did suspect the real culprit, but I never felt that the author had made it too easy to figure out.

Noskin turns some off-beat phrases, with a style unlike any other. Aside from Sasha’s appalling habit of taking shots of whipped cream straight from the can, I thoroughly enjoyed every page.

My interview with the author will be posted in the next week to ten days. Meanwhile, you can buy the book and enjoy an unconventional trip to Clovis.