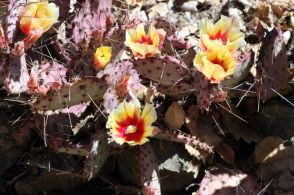 On a ninety-seven degree day with nineteen miles-per-hour wind, I had to run—well, jog, really—straight into the wind up the steep hill to reach my new favorite trail. And it was worth it. The rare little hedgehog cacti were displaying their last two blooms of the year. There are only three of these plants in the whole area where I’ve been running. Not a close family, they grow a foot or two apart. Their trunks are egg-shaped with starry thorn clusters, and they explode with big hot pink flowers that each stay open one day. The first time I rounded a bend and saw blossom number one, I gasped in awe and stopped. I looked deep in the cup of the flower to see something round and yellow bobbing and wriggling among the fluffy stamens. The hind end of a bee.

The rest of the desert is full of yellow flowers, the creosote bushes waving golden petals in the wind, and below them the low-growing purple prickly pear, also called a purple pancake cactus, is flowering as well. It looks like a mean little plant until it blooms. The pads can be purple, green with purple edges or green that looks as if it’s coated with purple, and sometimes the plant will sprout a single bright green pad. The thorns are long and sharp,  capable of penetrating the human toe quite efficiently. The buds are pink, but they open yellow with pink-orange centers or streaks. There were so many, when I closed my eyes in the shower after my run I kept seeing them, a sea of pale yellow flowers on a background of prickly purple.

I’m glad I saw so much beauty that day, because climbing the hill for weeks has reawakened an old injury which is quite literally a pain in the backside, so I have to stick to for flat ground for a while.

Unpaved flatness is hard to find. I tried a neighbor’s recommendation: the cemetery. It is flat, and has a dirt road and nice views of mountains in the distance, but the gate has huge signs on either side announcing that this is a Known Rattlesnake Area, warning visitors to use great care. I chose to run laps of an open green space where there are not yet any burials. I saw no snakes there, but ran over so many goatheads the soles of my shoes felt like Velcro on the grass. So I plucked them and switched to the dirt road on the side away from the main burial area. This offered windblown dust and flying goatheads—really—scratching my legs. I even got one stuck in my thigh. Easy to pull out, but still, this is not my favorite running spot so far. A few people visiting their loved ones’ graves must have thought me a bit weird, but surely, there’s at least one runner buried there. Someone whose spirit understood.

My next flat-ground attempt was a dirt road that goes from one of the residential streets in my neighborhood to the area behind (how lovely) the sewage treatment plant. I haven’t smelled the facility so far, and getting there is pleasant. I pass a friend’s house and see her positive-energy fence signs and window signs, such as “Mask your face, not your heart.” I even encountered her once for a distant air-hug and conversation.

Scenery along the dirt road is so-so. The scrabbly dirt side of hill I’m avoiding is at the end of the road. You have to be on top of it to see the cactus patch, so this view is not floral. On one side of the road are the backs of a few houses, including one with some huge prickly pears that have poppy-like orange flowers. On the other side is an area of brush, bare dirt, and weeds that looks as if it was cleared once and is now overgrown. Facing a patch of dirt sits a single off-white folding chair, suggesting someone chose to sit and contemplate this inhospitable spot. My friend Donna Catterick, the photographer whose work is on the covers of Death Omen, Shadow Family and Small Awakenings, calls such sightings feral furniture. The cover of Small Awakenings, my book of reflective essays, features a feral chair. (The feral recliner at the bottom of this post is another one of Donna’s photos.)

I met a birdwatcher on my second run on this route—from the recommended twelve feet apart while exercising—and wondered if that was his chair.

I also met a beautiful snake from an even greater distance. It was orange with black stripes that diminished to mere spots toward its rattle-less tail. I looked it up later and concluded it might have been a ground snake, possessed of mildly toxic saliva. Does anyone else think ground snake is an odd name? All the snakes I’ve ever seen were on the ground.

My third time down that road, I was pain-free and happy for many laps, and then I tripped on a rock. I didn’t fall. No, I caught my balance with an instinctive and intense effort of the injured muscles, and learned how much strength it takes to keep your balance, how hard you work in a fraction of a second of not falling down. Needless to say, the old injury revived with a vengeance.

Perhaps I will have to heal where I can’t even trip. Inactivity is its own kind of injury, though, and I need to see nature, so I guess I’ll be walking on pavement for a while. Dancing in my apartment when I need variety. Practicing yoga as if I were my own student with an injury. I can’t rush the process or I won’t heal at all. 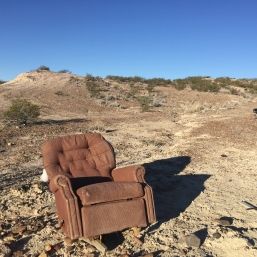 Even commonplace events can have depth and meaning, if we take time to notice. Power outages. Desert rain. Bats in flight. A stranger singing in a park.

In this collection of essays, Amber Foxx—a former college professor, now a mystery writer and yoga instructor—blends her insights as a teacher with her love of words to chronicle moments of beauty and deep attention.

Join her on a reflective journey though the small awakenings mindfulness brings into everyday life.